2. In England, women—often tavern proprietors’ comeliest daughters—both served and prepared most mixed-drinks, including punch. In other words, a woman’s place was behind the bar!

3. An original fifteen-ingredient punch was created for European nobility.

4. Some of the most famous punches were associated with clubs that later disbanded. Frustratingly, there seem to be no records of those early concoctions. It means we’ve lost far too many recipes to the mists of time.

5. The first written use of punch comes from 1632, when Robert Adams, a British East India Company man-at-arms, wrote a letter of advice to a colleague: “I hop you will keep good house together and drincke punch by no allowanc.”

6. The first to describe the drink originally known as palepuntz was German adventurer Joan Albert de Mandelslo. He visited the East India Company’s Surat factory in 1638 and defined punch as “a kind of drink consisting of aqua vitae, rose-water, juice of citrons and sugar.”

7. John Fryer, a young English physician working in India, wrote about Punch and its sub-continental origin in 1676: “At Nerule (Nerul, just outside Goa) is made the best Arach*...with which the English on this coast make that enervating Liquor called Paunch (which is Indostan for Five), from Five Ingredients.” His own name for the drink was composition diapente, i.e., “a concoction through five.”

8. Notably, all punch ingredients originated in India: arrack, cane sugar, citrus juice and spices (in addition to the more universal water). That said, there is no seventeenth-century documentation proving native East Indians ever drank the recipe.

*I.e., arrack, a spirit whose name derived from the Arabic, meaning “sweat” or “juice.”

Now that you’ve learned a thing or two about“The King of Cocktails,” it’s time to serve up your best punch—complete with old-school flourish.

Wondrich’s centerpiece is a white stoneware bowl that bears Cicero’s sage words—naturally in the original Latin. “Edamus bibamus gaudeamus. Post mortem nulla voluptas,” i.e., “Let us eat, drink, and be merry; after death there is no pleasure.”

To complement your varying party moods, the bowl comes with two ladles, a “Captain Morris,” in the English style, plus a “Turenne,” based on a model from nineteenth-century France. Georgian-era stemmed glasses round out a dashing gesture that invites guests to dip in and loosen up.

“Let us eat, drink, and be merry; after death there is no pleasure.” 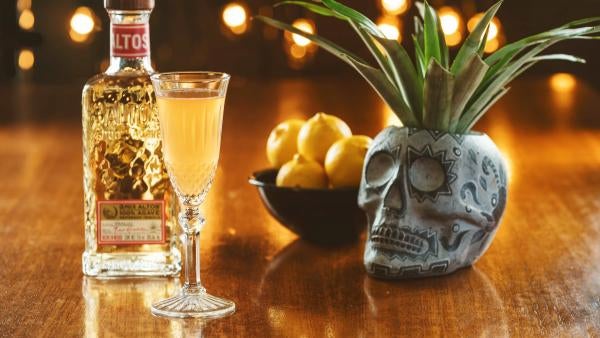