On this Mexican holiday, family members and friends gather to remember and honor their lost loved ones, in a loving celebration filled with festivities, favorite foods, and spirits alongside the living.

One central tradition connected with this holiday is building altars to honor the dead, where pictures of the deceased are surrounded by their favorite food and drinks and adorned with marigold flowers, candles, and calaveras ( sugar skulls) represented in candied sweets.

¿Did you know that the most familiar representation of Day of the Dead is the famous Catrina or the Lady of the Dead? She symbolizes the joy of life in the face of its inevitable end.

You may have noticed that this national holiday has been spreading globally over the last years and is now celebrated in different parts of the world. We invite you to join the celebration of this special day, along with a nice Altos Tequila.

Have you seen Pixar film "Coco"? Well, the Day of the Dead is an amazing tradition like the movie shows. It's celebrated on November 1 and 2 when Mexicans honor the dead, that helps them into the afterlife and encourage them to visit the world of the living for just one night. In Mexico, they honored deceased people, because death is not the end: it’s a new beginning full of hope and celebration.

The origins of the Día de Muertos are rooted in Mesoamerica, specially in Aztec festivities that used to celebrate the goddess Mictecacihuatl. Due to the arrival of Christianity which submitted indigenous groups around Mexico, the actual festivities vary from the past celebrations: now is a mixture of beliefs and rituals inherited from diverse cultures.

The Day of the Dead is not reladed with Halloween. However, might relate to the popularity of Día de los Muertos events, in the U.S.

Always together, but each in their own way, Mexicans do have a very special idea of how to honor the dead:

How Mexicans Celebrates Day of the Death in Major Cities

Since 2016, this celebration is a must if you visit Mexico City during Día de Muertos. Troupes performed to entertain the spectators. Each Saturday before November 2, elegant catrinas, calacas, traditional dancers, spiritual cleansers, giant skeletons puppets and fantastic animals dance though the major streets of the capital of Mexico. During two hours, spectators can enjoy the Dead Parade divided in segments that represents a different Day of the Dead tradition. You can also visit Mixquic Cementery ornamented graveyards near Mexico City. The atmosphere is lively and festive

Visit colorful San Miguel de Allende at this time of year is a privilege. On November 1, artists disguised as calaveras, or skulls, painted on their faces, dance through the streets among colonial buildings. The week-long Festival La Calaca, leads up this celebration and surely you will run into a Catrina, that represents a satire of a rich society woman, meant to remind us that even the wealthy can’t escape death.

You can also visit the municipal cemetery and learn about the folklore that accompanies this festival and the rituals that local communities perform in honor of their dead. You cannot miss that thanks of its cultural richness, the city was has been declared by Unesco as Intangible Cultural Heritage of Humanity.

Some of the most awesome places to celebrate the Day of the Dead is Oaxaca City. Family members and friends come together to remember their dead loved ones through favorite foods, tequila, prayer and colorful altars. Like in Mexico City and San Miguel de Allende, parades, vigils and concerts took place but this city is is known for Calenda – a type of street party that includes massive puppets on stilts, costumed dancers, music and fireworks.

Another must is to visit the local market: will be bursting with the orange of cempasúchil flowers, one of the most important symbols of the Ofrenda at Día de Muertos. Also visit the Panteon San Miguel to see graves lit up with candles, and families honoring and remembering their relatives.

Make your own ofrenda

“Ofrenda” is the name Mexicans give to Day of the Dead altars—an offering of delectable, traditional food, which is a gesture of thankfulness and love for the departed, as well as a celebration of the good things in life.

Here is a list of the main elements you want to include on your ofrenda. Don´t forte to include Pan de Muerto bread:

These are traditional candies made from sugar (remember that sugar cane came to America from the Middle East, due to the Spanish conquest); this ingredient fused with the indigenous cosmovision and the tzoales or alegrías that were made with amaranth.

In Náhuatl, Cempasúchil means “flower of 20 petals.” It holds great symbolic value, especially during Día de Muertos. In fact, the petals are spread on the ground to mark a path which will guide the souls of the dead so that they can find their way to the altars that their family members and friends have created in their honor. Traditionally it is believed that these petals carry the warmth of the sun and illuminate the road back home for the dead.

This represents the source of life. It is offered to the souls so that they may quench their thirst after a long journey and be strengthened for their return.

This purifies and staves off the souls that were corrupted along the journey.

The candles’ light illuminates the path for the souls so that they may find their loved ones’ homes without getting lost. Tip: Altos Tequila bottles make great candle holders.

These stencil cut banners are now made from tissue paper. However, their origins date back to a prehispanic tradition that over time was adapted to Catholic rituals. Each color has a meaning; for example, orange represents mourning, yellow means that the person died in old age and black represents the underworld.

Bread of the dead

For its circular form, the bread of the dead represents the cycle of life and death. The ball in the upper center represents the cranium and the crisscross “bones” represent the four cardinal points.

Ofrendas always include the favorite dishes and fruits of the deceased. Moles and citrus fruits are common.

It is vital to include a printed photograph of our loved ones in order to remember them. Although we can’t see them in person, they still exist in our memory.

We offer our dead the best tequila as we remember the beautiful moments of life with them.  This also offers a great incentive for their spirit to return and visit us once again!

Día de muertos have a relevant cultural significance around the world, since in 2008 was declared a UNESCO event of Intangible Cultural Heritage, and was designated as a national holiday.

In some countries of Europe and in the US they celebrate this Mexican Day honoring dead. You can observe in many restaurants, bars and even public places colorful ofrendas and watch families visiting their love ones graves on All Saint’s Day. In Brazilians, for example, celebrate Finados on November 2 and Bolivians join Día de las Ñatitas six day later.

Are you ready to celebrate life?

We have created the perfect Altos Tequila cocktail to loyally honor this festivity. Another reason to celebrate Día de Muertos!

For turmeric and ginger syrup:

Combine all ingredients in a shaker with ice. Shake, and strain into an ice-filled rocks glass. Finish with the dashes of Peychaud’s Butterfly Pea. Garnish with a marigold with 2 drops of neroli oil on its center. 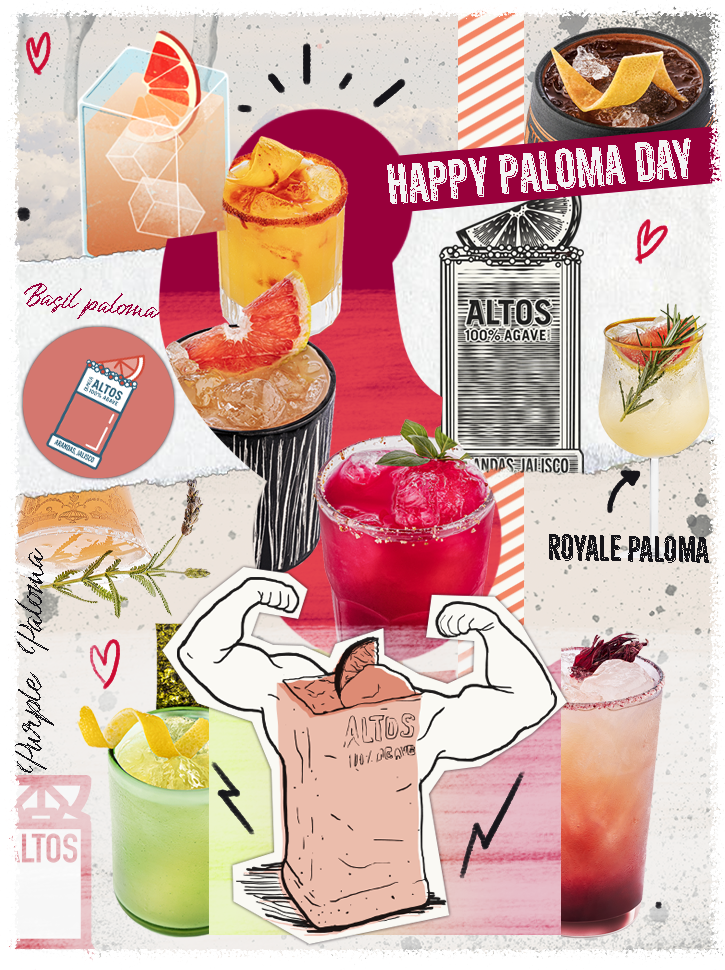 Mezcal: did you know?