My work worldwide as Tahona Society food ambassador has found me springing epazote on unsuspecting bartenders, most of whom have never heard of the Mexican herb. To my delight, they’ve been inspired. They say it’s “a cousin to peppermint and basil.” Or that it “smacks of turpentine,” with a “whisper of bathroom cleaner” (to which I should have thrown some shade). To me it tastes like epazote, nothing more, nothing less.

Opinions will differ. And it hasn’t helped anyone win a cocktail competition—yet. But I love sharing the deep, nostalgic connection I feel to it—with hundreds of friends and colleagues, at home and everywhere I go.

“Opinions will differ. And it hasn’t helped anyone win a cocktail competition—yet. But I love sharing the deep, nostalgic connection I feel to it…”

Epazote’s story is as old as Mexico. In my case it’s like a memory from several lifetimes ago. When I was a boy, my family lived on the outskirts of Cuernavaca, a resort town a bit more than an hour south of Mexico City. It’s famed for lush gardens and celebrities on the down-low, but don’t be fooled: our neighborhood was an all-but-abject suburban tract that put me and my brother—then my only sibling—into direct contact with nature. Direct contact as only kids can, complete with dirt-, weed- and bug-eating (and not the insects that Mexico City’s traditional markets, as well as some of its fancier restaurants, sell).

“You two must be crawling with lombrices” (i.e., intestinal worms), my mother, disgusted, would exclaim. When an infestation seemed immanent, she’d order me out to the yard to fetch epazote. There was a big plant, leafy and green, or purplish, or somewhere in between, right by the front door. The smell was sweet, strong and penetrating. I’d pull off two or three long shoots and mom would wash them and set them to boil for a medicinal tea. My first encounter with the weed—ahem, herb—was as a sure-fire de-wormer.

“We’d drink the tea in one gulp, holding our noses, though not so much for the smell. Mom said we had to avoid “alerting” the worms in our bellies. If they knew epazote was coming they’d “run for cover” and the cure wouldn’t take.”

Fast forward, I’m now fourteen.  By then I was proudly, if precociously, cultivating my taste for Mexico’s regional flavors. My grandmother would make chilaquiles for breakfast every Sunday and I’d always show up to eat two or three platefuls.

Making salsa for chilaquiles (or indeed, any other “boiled salsa”) in our part of Mexico calls for simmering a major clump of epazote for as long as possible in the final cooking stages. You can tie the herb into a pretty, poor-man’s bouquet garni. But your old-school grandma will simply plop a whole stalk into the stew. It doesn’t break down, even after you’ve boiled it limp. You usually pull it out before serving, but not abuelita: she’d pour the totopos (what Mexicans call tortilla chips) right into the salsa and serve. I like to think she did it to see me fish out the precious herb—and then eat the whole megillah with my chilaquiles, the epazote now sopping in piquant, pepper-flavored broth. The memory can still get me misty; I haven’t had such delicious chilaquiles in years.

“Making salsa for chilaquiles (or indeed, any other “boiled salsa”) in our part of Mexico calls for simmering a major clump of epazote for as long as possible in the final cooking stages.”

De-worming and chilaquiles are just the beginning. Simply put, epazote is central Mexico’s essential kitchen herb. We love—no, adore it. For me, it’s what makes Mexican food taste Mexican. Plus it grows everywhere, even in cracked sidewalks in big, bad Mexico City. Every time you taste it, you take in the flavor of the land. It’s down-home—practically a weed, as noted—but to me it’s part of infinite culinary refinements. It’s also an eloquent reminder of how tastes that Mexico’s pre-Columbian ancestors loved are still showing up on the table, thousands of years later.

Are you familiar with epazote? Have you ever seen it grow? How would you describe it? I’m intrigued! 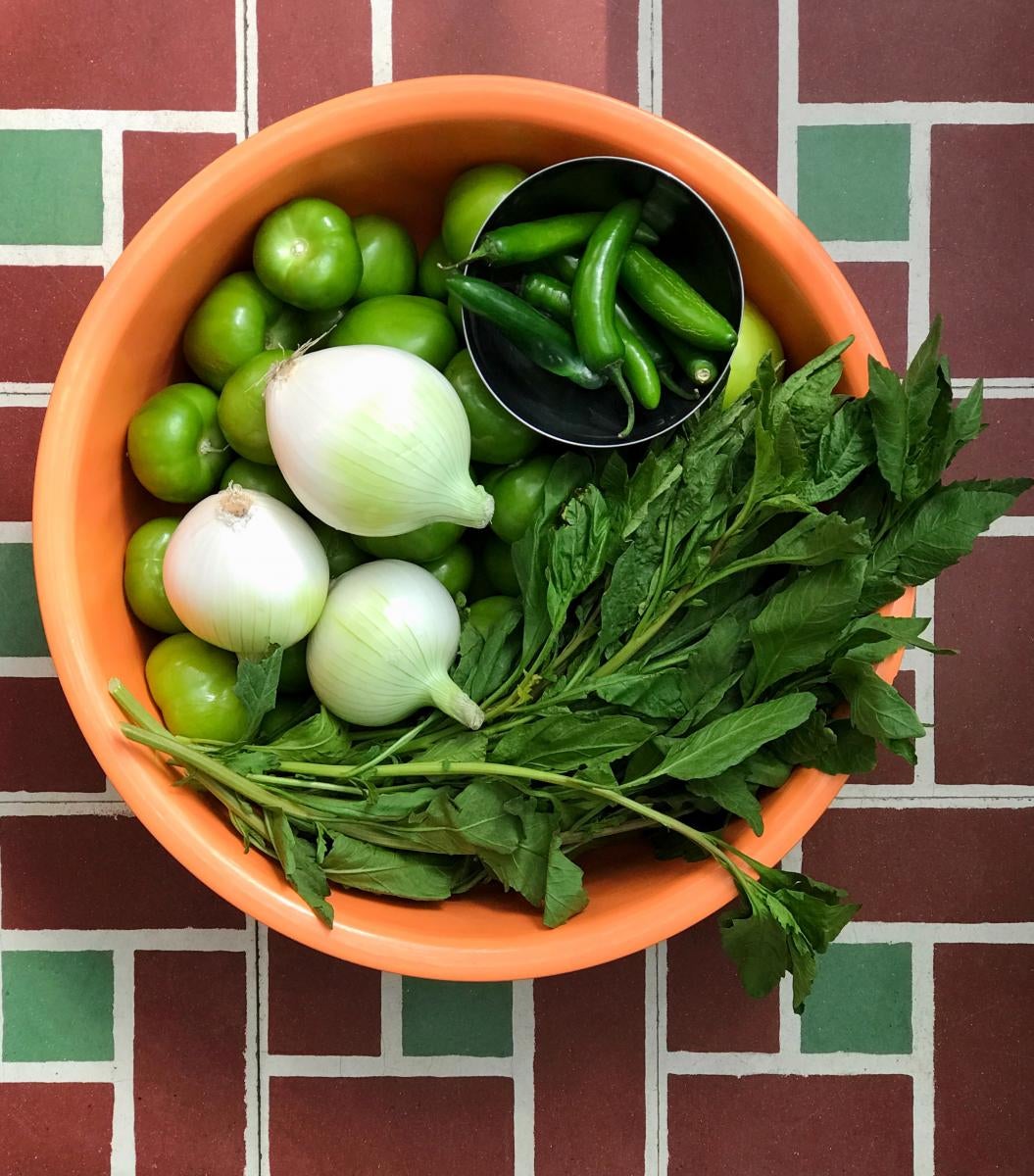